His winning idea: Connect Knoxville to a real life Operation game with shocking devices. Every time a player screws up and the buzzer goes off, the "patient" gets a burning shock to the correlating body part. 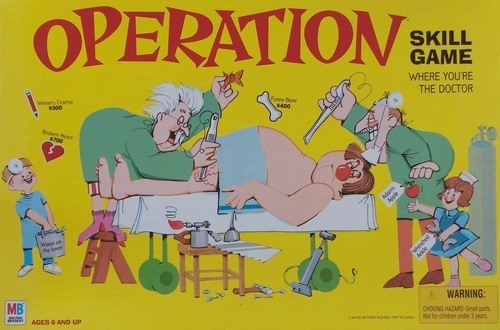 Well, Knoxville chose poor Jackass regular Danger Ehren to "volunteer". Originally, we were simply going to use stun guns, the kind the Jackass crew kiss each other with every day. But the folks at NBC, 30 Rock, got queasy at the notion of this kind of tomfoolery going on in their studios. Over the weekend, the mandate from above was "no stun guns on the Fallon show". So in a mad dash to rescue the stunt, we decided to used a dialed down electric fence as the shocking device rather than a stun gun. Conceptually this made sense, except the wizards in charge of the network asked to lower the voltage, and with a slight increase of amperage.

That translated to an even worse shock for Ehren. It hurt him! And there were some modest burn marks to prove it. Watch him suffer below.

P.S. Just out of sheer sadism, we are checking on the amp and volt stats. Our theory is that we would have inflicted a whole lot less pain if we had simply stayed with the stun gun as planned.

Ehren said the ringing feeling in his nuts was ... well ringing. At the dressing room after the show, he still felt the pain. He said the shock to the knees were second most painful after the gonads. After the show, when Knoxville and Ehren were trying to analyze the pain difference between stun guns and electrical fences, a grip from NBC mentioned that after four shocks, NBC management (behind the stage) ordered the electric fence to be unplugged. We think they were afraid of mortally wounding Ehren.

Always the perfectionist, Knoxville became incensed and demanded a reshoot....at which point Ehren begged for mercy.

Why Hulu, why? you need to consider the people who live outside of the USA