Easter isn't the typical occasion for pranking your friends, co-workers, or boss (if you dare). But this Easter egg-inspired prank by Redditor cheesewing is pretty ingenious, and handing out chocolate eggs any other day of the year might raise some suspicion. 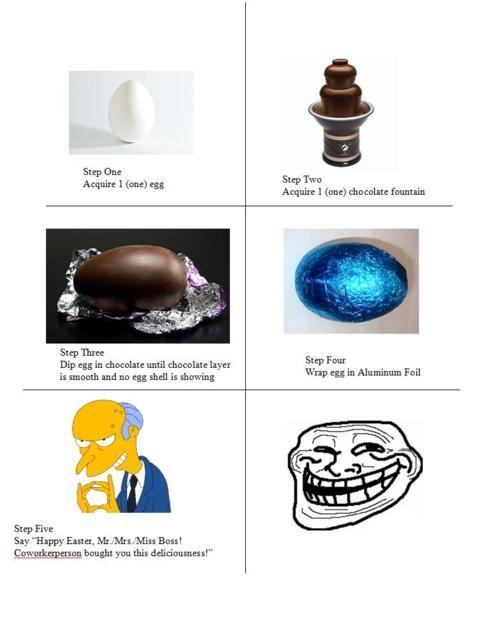 The directions above call for a chocolate fountain, but I think you're resourceful enough to get around that one (though I would welcome an excuse to "acquire" a chocolate fountain). Simply get a raw egg, use tongs to carefully dip the egg in melted chocolate (I suggest several layers to build up a convincing texture/thickness), let dry, and wrap in a festive foil.

Hmm...Let's see, Easter is a whopping ninety-four days away, so I think you have plenty of time to practice.

"Putting an egg with a shell on it in vinegar overnight will dissolve the hard outer shell, but leave the rubbery egg behind. The shell is calcium, and the vinegar dissolves it. IIRC, you'll have to wipe the shell away, but it turns into powder so it should be pretty easy. Run it under water to get rid of the powdery crap. There you go. Now you have an egg with no shell, but it's not cooked. It's kinda fun too, it bounces a bit and you can see the yolk inside the clear stuff."