The artwork for Minnesota's Land O' Lakes butter packaging is classic, dating back to 1928 when it was first created by Brown & Bigelow illustrator Arthur C. Hanson. The logo was updated ("modernized") once in 1939, again in the '50s, and has undergone minor modifications here and there since. The legendary packaging is good for two rather nerdy tricks: A) a very trippy optical illusion and B) a very infantile boob illusion. 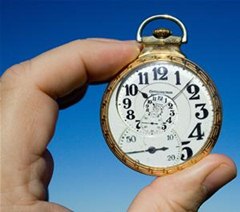 The first fascination to be associated with the  icon is its capacity for an infinite-loop motif—or more specifically, the Droste Effect: a visual effect in which a motif can theoretically be repeated infinitely within itself. To view this effect within the Land O'Lakes image, you would need a super powerful magnifying glass, or the ability to expand the most forefront image to enormous proportions. To see the effect visually illustrated, check out the (unrelated to Land O'Lakes) image to the right.

As promised, the second fascination brings us to boobs. Just as nerdy as the Droste Effect, yet an entirely breed, the Land O'Lakes butter packaging boob trick is sure to please kids and (juvenile) adults alike. Here's how it works: 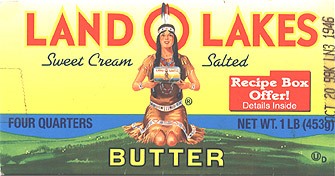 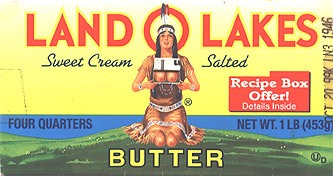 To do it yourself: YouTube user calvirgil has shared a video demo of the process, so simply watch and follow along below. He folds the Indian woman's knees up to create the illusion, but I prefer the version illustrated over at BeUnproductive.com, which is neater (pictured directly above).

First, here are the steps to the "cleaner" method:

Over 7 minutes long? Really? All you need to watch is at 6:27.
Another fun thing would be to take the word "breast" from the back writing and put it there too.

Cutting isn't necessary--it's like doing a Mad Magazine fold-in. My dad taught me how to do this YEARS ago.

This will land you in F B. jail